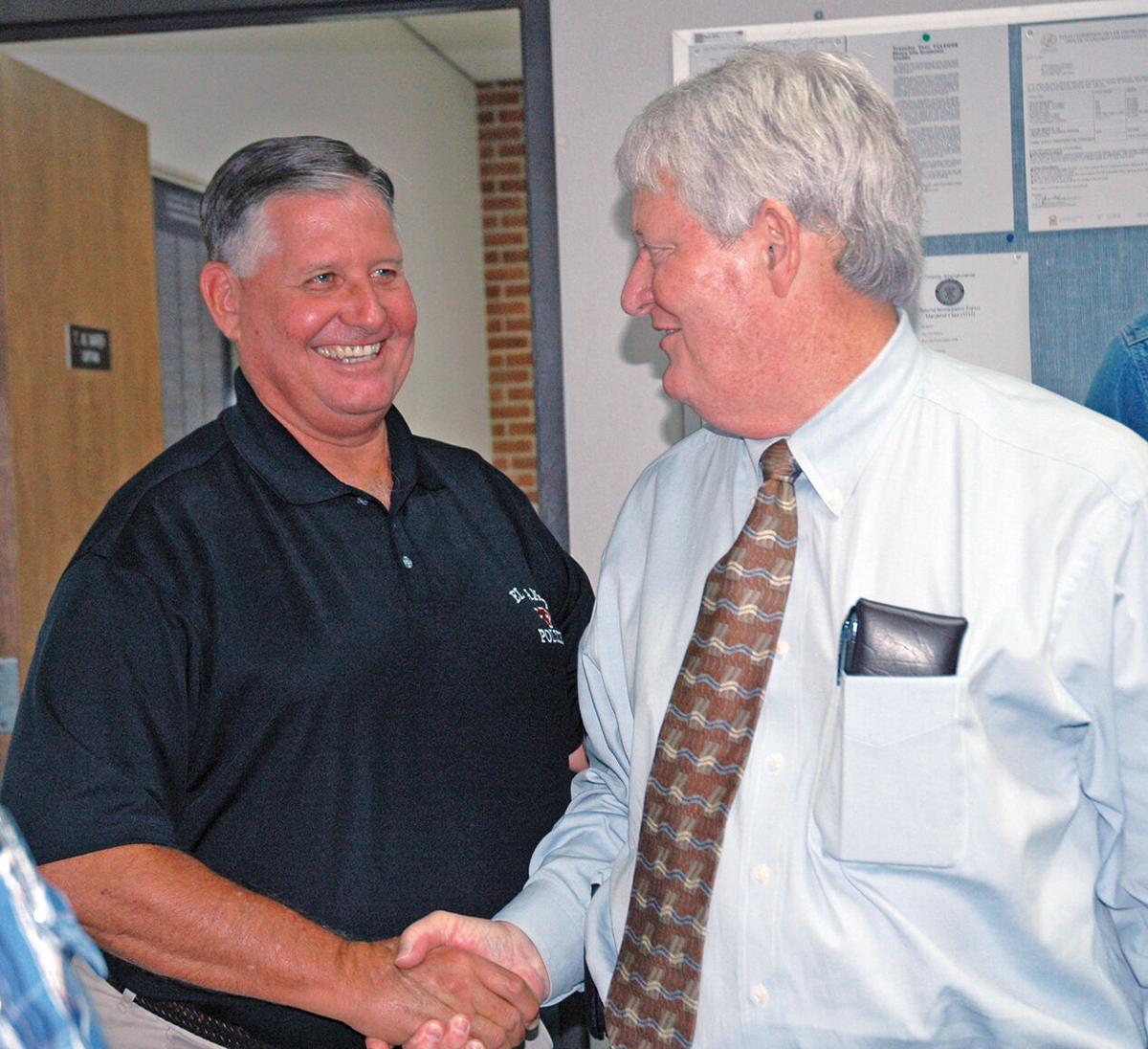 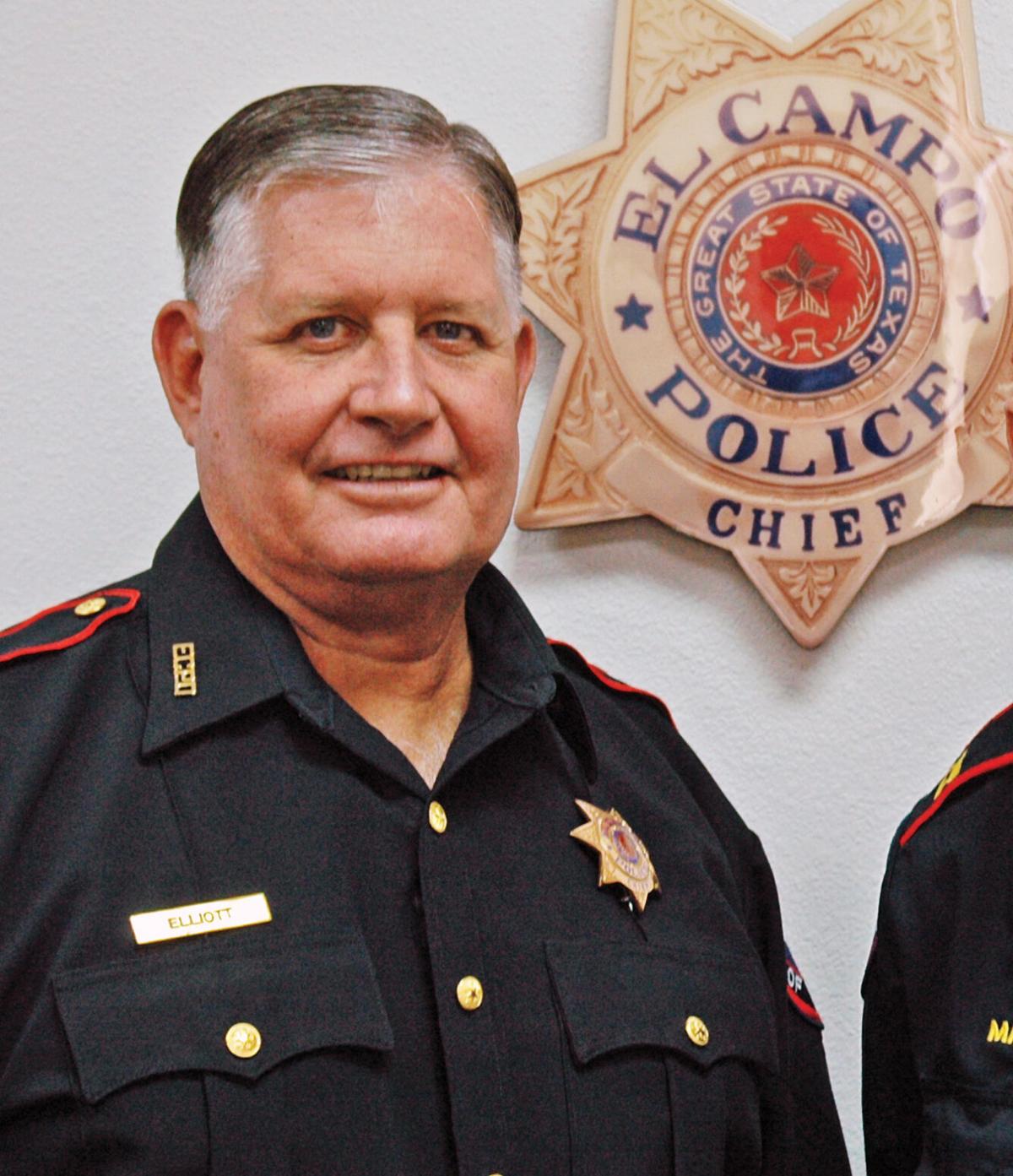 Jim Elliott, orginally hired as a patrol officer, worked his way up to become chief. He helped design the former station on East Jackson and continued to visit the department after his retirement.

Jim Elliott, orginally hired as a patrol officer, worked his way up to become chief. He helped design the former station on East Jackson and continued to visit the department after his retirement.

Elliott was the third police chief in the history of the El Campo Police Department that formed in 1946, four decades after the city itself incorporated. He served 28 years in that role before passing the office to ECPD Capt. Terry Marek in April 2009. Marek held the office slightly more than a year before current Police Chief Terry Stanphill took office in August 2010.

Police Chief Jim Elliott had a fondness for the city that he shared with the Leader-News in a 2005 interview. “I’ve always thought that El Campo was special. Neighbors with can-do attitudes work to keep neighbors safe. It’s been that way since I got here in the ‘70s, and I imagine that’s the way it started,” he said.

For that city centennial special section, Elliott shared his amazement over the changes in law enforcement during his career. He started work in an un-air-conditioned building with a counter and the police chief’s domino table (Walter Broadus was chief at the time). It was when even police radios were limited and computers in patrol cars were non-existent. “What we can do is just unbelievable as far as law enforcement is concerned,” Elliott said. “It’s right up there with space travel.”

Stanphill recalled being hired by Elliott in 1982.

“I always told him, jokingly, that the best thing he ever did was marry his wife Linda and hire me as a police officer,” he said.

The two worked together for 18 years with Stanphill serving as the department’s first canine officer and first narcotics officer under Chief Elliott.

“We saw a lot of change together in every aspect of law enforcement. I learned a lot from him in those years and years after he retired that undoubtedly helped me make it to where I am today,” Stanphill said. “Chief Elliott was a good boss, we did not always see eye to eye, but we could discuss issues, and both come out better. I always heard the road to leadership starts at a very young age, you never stop learning and there will be those that make a major impact. Chief Elliott was a great mentor and one of those that played a major role in my leadership skills.”

“But that’s not a reflection on him. That’s just the change in law enforcement,” Stanphill said.“He was progressive, but also very conservative and frugal with the budget.”

Former City Councilman Robert Boone served on the force with Elliott during the 1970s. “He loved bubble gum. He would buy it by the boxes,” Boone said, adding it was always in his cruiser. “He was a good officer. He did his duty. When I was on council (starting in May 1997) he was chief of police. He was kind of strict. He ran a pretty tight ship.”

Boone added, “He (Elliott) loved to write tickets (as a young patrolman).”

In all, Elliott served El Campo citizens 33 years. Prior to that he had been a police officer with the West University Place Police Department in Houston for three years, moving to El Campo after marrying wife Linda, a now-retired El Campo Middle School counselor.

Elliott spent three years on patrol in El Campo before being promoted to detective.

During a 2009 interview with the Leader-News, he said, “I remember my first arrest, and that I put the first person in this jail,” he said, meaning the East Jackson station demolished last year. “He was arrested for public intoxication.”

Elliott saw the standard crimes in El Campo go from burglaries in the 1970s to the crack “epidemics” of the early 1980s. “It replaced marijuana and it just spread like wildfire. It took a grip on this town.”

He told the Leader-News at the time that he remembered crowds throwing bottles at police cars and attack dogs being purchased by the department to control crowds. “But working with the district attorney, we were able to catch the main dealers and sent them on long prison terms, and were able to get control again.”

He left the office in 2009 confident in the people he had worked with saying, “The department is in good hands.”

Elliott was a long-time member of the El Campo Lions Club, a big supporter of the 100 Club of Wharton County and a member of First United Methodist Church.

The former police chief served on the El Campo Board of Adjustment.

“He was a big duck hunter. We hunted together. We were young men then,” Boone said. “I’m sorry to hear (about Elliott’s death). I didn’t know he had issues.”

Stanphill also saw the man he called chief become a friend as well.

“Of course, we became friends through the years. (We) shared a few hunting, fishing trips and a whole lot of golf,” he said. “I also had the pleasure of getting to know his family through the years. They are a great bunch. Chief was very proud of his family. He was a great friend to many of us.

Although retired, former Chief Elliott would still come by the station on a regular basis to visit officers, keeping in touch.

“He often came by with pastries and had breakfast with us,” Stanphill said. “I know he will be truly missed by his family and the ECPD family.”

Elliott is survived by his wife, three children and six grandchildren.

Private services for Elliott are pending with Triska Funeral Home in El Campo.